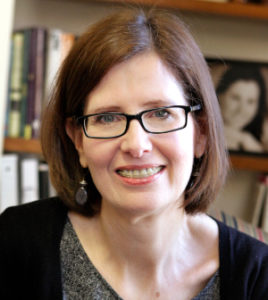 Dr. Morgan’s training is in 19th-century American literature, especially in those writers whose works comment on the social issues of the period such as Ralph Waldo Emerson, Henry David Thoreau, Frederick Douglass, Charlotte Perkins Gilman, Upton Sinclair, and the subject of her dissertation, novelist William Dean Howells. In addition to teaching English courses covering these periods (ENG 352, 353, and 354), she also teaches a senior seminar (ENG 480) about changes in the American literary canon and general education courses such as ENG 224 (Theme in Western Heritage) and the American literature survey (ENG 265).

Dr. Morgan also has training in Women’s Studies and is a former chair of the Women’s and Gender Studies Department where she developed service-learning courses on violence against women and sex trafficking.

She served as Mercer’s senior vice provost for service learning from 2008-2020 and has been recognized for her work, being named a finalist for the national Thomas Ehrlich Civically Engaged Faculty Award that recognizes outstanding leadership in fostering community partnerships, conducting community-based research, and enhancing higher education’s contributions to the public good. An advocate for social justice both on campus and in the community, she has initiated projects to raise awareness about issues such as violence against women, sex trafficking, LGBT rights, poverty and racial inequality. She has co-led a Mercer on Mission trip to work in townships in Cape Town, South Africa, multiple times. She and her husband have two children.