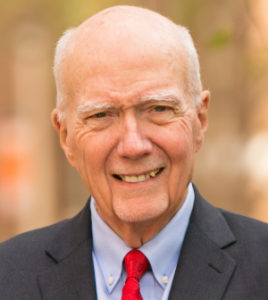 Dr. Wallace L. Daniel came to Mercer in 2008, having taught and served as dean of the College of Arts and Sciences at Baylor University for many years. First as provost, then as a member of the History Department at Mercer, Dr. Daniel has found Mercer to be a place focused on combining strong teaching with research and especially with engaging students in the process of discovery and the development of communication skills. As an historian of Russia and the former Soviet Union, Dr. Daniel is a passionate advocate for international education, believing that such an experience broadens one’s outlook on the world, as well as deepens understanding of one’s own country. He views the study of history as a means of encouraging empathy towards others, of teaching individuals to see through different eyes, and of discovering connections between diverse cultures, attributes essential to strong leadership in a complex and rapidly changing society.

At different points in his academic career, Dr. Daniel has had two fields of research. Earlier, his main scholarly interests concerned the era of Catherine the Great and the Russian merchants. More recently, he has shifted his focus to contemporary Russia, centering his research and writing on civil society, the intelligentsia, and the Russian Orthodox Church and its struggles to regain its cultural heritage and identity. He has written a biography of Father Aleksandr Men, arguably Russia’s most prominent Orthodox priest in the second half of the 20th century, and he has completed a translation of the memoirs of two Russian women in the catacombs, a volume scheduled for publication in early 2021. His teaching has converged around related topics, including Revolution and Religion: A Comparative View, Church and State in the Modern World, and History of the Soviet Union and Post-Soviet Russia.